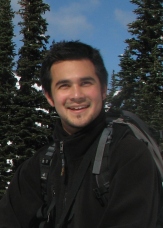 Before coming to Seaquam Bryce had a varied sports background. He played rep hockey during his youth as well as making the BC Best Ever under 16 team in 2000. He is also an avid outdoorsman with more than 10 years of Rock Climbing (bouldering, sport and traditional) experience as well as instructing and belaying at an Indoor climbing gym. Bryce was also a white water rafting guide on the Squamish, Elaho and Cheakamus rivers where he earned certification for Swift Water Rescue, First Aid and his BCROA guides licence. While volunteering and then working as the Junior Youth Interim Pastor at Granville Chapel, Bryce found that sport and games offered a wonderful means to connect with students which then helped him to build good relationships and be a more effective teacher.

Bryce Hamade is currently an Engineering and Robotics teacher at Seaquam Secondary School and has been teaching for ten years. In his second year of teaching he began helping Bill Richards to supervise golf matches at both the Junior and Senior Level. Bryce began studying the game of golf and over the next few years he managed to lower his scoring index to a single handicap. Bryce is confident that time on the course and at the range with good instruction and knowledge of the fundamentals will be a rewarding and enjoyable experience for students who share a love for golf.

Keri’s beginnings in golf started at a young age under the encouragement and instruction from her grandfather and father, both members of the PGA of Canada. After a successful junior career in Southern Ontario, she went on to receive an Honours Degree in Environment and Resource Management at the University of Western Ontario as well as a Professional Golf Management Certificate at Humber College in Toronto.  Keri achieved her Class A CPGA status in 2004 and became one of the only father/daughter Class A Golf Professionals in Canada.

During the past 14 years as a teacher, coach and Director of Instruction, Keri has been passionate about advancing the game of golf through quality instruction and has dedicated much of her professional career to creating exciting and fun programs for beginners, women, and juniors. She has become known for her patient manner and ability to adjust her teaching style to fit the individual needs of each student.  Keri’s teaching philosophy is centered around the importance of the swing fundamentals as well as designing lesson plans based on realistic and attainable goal setting.  Keri is currently the assistant coach for the UBC Women’s Golf team and has coached for the British Columbia Golf, and the BC Summer Games. She is also the recipient of the 2011 PGA of BC “Teacher Of The Year”. 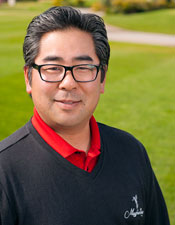 With many years of experience in the golf industry and professional competition, Shingo possesses the necessary knowledge and experience to enhance the game of every golfer, from beginner to seasoned professional. By focusing on swing fundamentals and specializing in the short game, Shingo enjoys working together with his students to determine the most effective ways to meet and exceed a player’s goals.

Shingo Akizuki joined the Mayfair Lakes team in 2003 and became a member of the PGA of Canada later that same year. In 2007, he played a full season on the Canadian Tour, where he had the opportunity to play against and observe the practice routines of some of the world’s best golfers.

Taylor was first introduced to the game at the age of nine by her father Simon Kim who is a teaching professional. She grew up in a golf family where her younger sister Michelle Kim also plays competitively. Taylor made her competitive debut at the age of twelve on local junior and provincial series and immediately won B.C Juvenile Girls’ Championship in 2009. As a junior golfer, Taylor was soon nominated to represent her province, British Columbia in many provincial tournaments in Canada including B.C Summer Games and Canada Summer Games where she swiped Gold Medals for herself individually and for her team.

From 2011 to 2015, starting at age 15, Taylor was selected to join the Canadian National Team where she trained with the best players and coaches in the country. Taylor represented Canada competing all across North America and Europe. Her success on the golf course helped her receive a full ride athletic scholarship at Kent State University in Ohio. In 2016, Taylor earned MAC (Mid American Conference) Player of the year with one individual win and was part of thirteen team wins including 3 MAC Championships. She was also a 1-time 1st Team All MAC and 1 time 2nd Team All MAC. Taylor was first for individual single season scoring average (72.24) and set a record for single season, 15 rounds of par or better. She was also successful in the classroom as she graduated in 2016 with a degree in Communication Studies.

Taylor turned pro as soon as she got out of school and immediately won a sectional qualifier to play in the U.S Women’s Open in San Martin, CA. She went through stage 1 and 2 of LPGA Qualifying school and earned full status to play on the Symetra Tour for the 2016 and 2017 season. She joined PGA of Canada in 2016 and currently coaches out of Beach Grove Golf Club experiencing in coaching golfers at all levels from beginners to elite players wanting to turn pro.